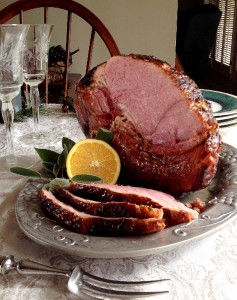 Ham. What a fickle meat. Unlike beef, which has a variety cuts but comes one way; uncooked and definitely not spiral-sliced, buying a ham can lead one down the bone-in, semi-boneless or totally boneless trail, up the spiral cut or uncut mountain and across the fresh or already cooked fields.

Personally, I like the semi-boneless, uncut, cooked ham. I believe that the bone adds to much flavor to be omitted, the pre-cut hams have a higher chance of drying out in the smoker and the cooked ham spends the perfect amount of time in the smoker; enough to pick up the smoky flavor without it overwhelming the taste of the meat.

Smoking a ham is easy enough, but keeping it from drying out is the trick. My method was to coat everything but the cut side of my 8-pound ham with honey mustard (your favorite brand will do), then pat a light layer of dark brown sugar over the mustard. That was all the prep it needed.

Once the Lang BBQ Smoker cooker hit 225 degrees, I added a soaked piece of mesquite and laid the ham, cut side down, on the grate.

After an hour and a half of smoking, I removed the ham, poured a bit of fresh orange juice over it, laid it on a big piece of foil, and closed the foil up. I put the ham back on the grate and let the meat cook for an additional hour and a half.

During that last smoking time, I made the glaze, letting it reduce down to the right consistency. When it was ready, I uncovered my ham, leaving it on the foil, which became a ‘plate,’ and poured the glaze over the meat. I smoked the ham for an additional 15 minutes, then removed everything to a platter, which I loosely covered the meat and let it rest for 30 minutes.

The results were an incredibly tender, juicy ham with a fantastic citrus, sweet yet spicy glaze.

Methods of Cooking this Recipe 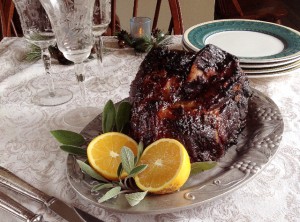